Barbara Matijevic studied languages and literature in parallel with dance and acting in Zagreb (Croatia).
With Giuseppe Chico, she is the founder and artistic co-director of the theatre company Premier Stratageme based in Paris.
In her work she explores the impact of digital culture on storytelling through the forms of auto-fictional performances, lecture performances, radio plays, group choreographies, photo exhibitions and installations. Her work has been presented in over 30 countries in Europe, Asia and Latin America, in theatre and dance venues, film festivals, art galleries and museums.
As a dancer and actress she has worked with a number of choreographers and theatre directors in France, Croatia, Slovenia and Belgium (Boris Charmatz, Joris Lacoste, Bojan Jablanovac).
She has taught at Osijek Art Academy, Zagreb Dance Academy, Helsinki Academy of Fine Arts and Lasalle College in Singapore.
She is based in Paris and works internationally.

Born in Bari (Italy) in 1974. He was introduced to theater as a child, first by watching operettas and then, at the age of 10 years, by taking classes at the theater Abeliano Tina Tempesta and Antonella Porfido in Bari. After a several years interruption of professional basketball playing, he pursued his theatre practice with Robert McNeer at the theater Kismet. He also worked on several occasions with the set designer Paolo Baroni. In 2000 he moved to Paris and began studying dance and composition with Joao Fiadeiro, Vera Montero, Julyen Hamilton, Mark Tompkins, Vera Orlock, Pooh Kaye, KJ Holmes, Olivier Besson. For several years he performed with the company Mille Plateaux Associés. He also collaborated with George Appaix, Anja Hempel, Magali Desbazeille. In 2007 he performed in Purgatory, written and directed by Joris Lacoste . In 2007 he started a collaboration with Barbara Matjevic. He lives in Paris. 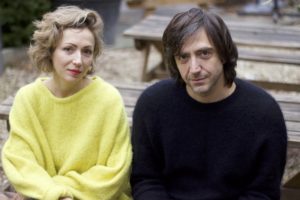